The Young Hemingway by Michael Reynolds

"The Young Hemingway will entertain and surprise…It should rank as one of the best nonfiction books of the year." ―Los Angeles Times

Michael Reynolds recreates the milieu that forged one of America's greatest and most influential writers. He reveals the fraught foundations of Hemingway's persona: his father's self-destructive battle with depression and his mother's fierce independence and spiritualism. He brings Hemingway through World War I, where he was frustrated by being too far away from the action and glory, despite his being wounded and nursed to health by Agnes Von Kurowsky―the older woman with whom he fell terribly in love.

Ishraat Sarabhai is a chemist and manager of QA when her company is taken over by terrorists with her as a hostage. Despite being injured by her captors, she finds a way to escape locked confinement. As she heads for an exit she finds another manager dead. She takes a sample of a bodily excretion, returns to her lab, and discovers he's been poisoned by a substance used for production only accessed by top management. In hiding, Ishraat texts her fiance, Raj, who is a professor at a university ninety miles away. He's heard of her company's takeover and commits to joining her. Ishraat stays elusive until Raj gets into the building to help her. They find another manager poisoned in the same way. The police finally retake the building when the last terrorist escapes. Ishraat and Raj need to solve the murders or be charged with them.

Beautiful, young, professional women, believe that they are being courted by a very handsome rich man.Little do they know that it's a part of his plan.For years, Alec has wanted to take one of their lives but ultimately pulled out, fearing discovery and arrest.When he gets an unexpected opportunity with a total stranger, he takes it, and it sets off a cycle of murder. Alec also has a brother, George, a former rapist who is more than happy to do his brother's killing once he has his own time with the victims.Thousands of women go missing every year in the U.S., and unless there is evidence to suggest otherwise, then they remain classed as missing persons.Detective Garcia believes that the women are being murdered, but she needs to find some evidence before the wealthy and educated brothers disappear.Set in San Francisco and its East Bay, this story will make you realize that even if you're very careful, very bad things can happy to you by the ones you would least suspect. 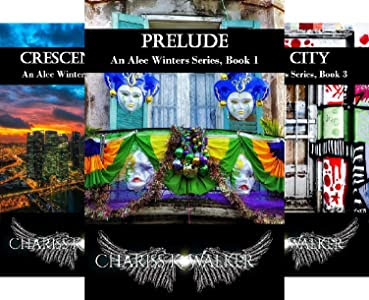 From Book 1: A young man is supernaturally transformed!

It all began when 17-year-old Alec, a New Orleans teen-jock, discovered a terrible family secret involving his younger sister, Catalina. Alec's ensuing rage and desire for retribution took over. His fury was the catalyst that propelled Alec into this paranormal change.

Good news! You can get the entire 4-book series in one download! ASIN: B07GB92GJ7

Was the Winters’ family secret instrumental in changing Alec’s life or was it his destiny?

As both angel and demon, he is a protector of innocent victims and a punisher of those who hurt them.

Prelude, a prequel to Crescent City, shares a behind-the-scenes look at Alec's life before that fateful night and gives little-known facts about Alec’s relationship with Sabrina, Chaz, and Danae.

This dark-urban-fantasy, supernatural suspense thriller is only the beginning of Alec’s controversial story as an angel and demon. You can read more about his life on the gritty streets of New Orleans in Crescent City, Port City, and Harbor City, the last installment in this emotionally-charged 4-book series.

Author's Warning:
Rated R: This dark fiction story - deals with elements of fear, death, and the darkest side of life and contains many emotional triggers. Not for the faint of heart, not recommended for those under the age of 17.

Fans of the movie, The Equalizer and the television series Supernatural and Constantine will enjoy An Alec Winters Series.