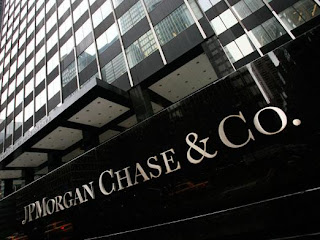 “JPMorgan Chase (NYSE: JPM) is one of the oldest financial institutions in the United States. With a history dating back over 200 years, here's where we stand today:
We are a leading global financial services firm with assets of $2.3 trillion.
We operate in more than 60 countries.
We have more than 240,000 employees.
We serve millions of consumers, small businesses and many of the world's most prominent corporate, institutional and government clients.
We are a leader in investment banking, financial services for consumers, small business and commercial banking, financial transaction processing, asset management and private equity.
Our stock is a component of the Dow Jones Industrial Average.”
“JPMorgan Chase & Co. is one of the oldest, largest and best-known financial institutions in the world. The firm's legacy dates back to 1799 when its earliest predecessor was chartered in New York City.
Our firm is built on the foundation of more than 1200 predecessor institutions. Its major heritage firms — J.P. Morgan, Chase Manhattan, Chemical, Manufacturers Hanover (in New York City) and Bank One, First Chicago, and National Bank of Detroit (in the Midwest) were each closely tied, in their time, to innovations in finance and the growth of the United States and global economies. As JPMorgan Chase & Co does today, these firms also made significant contributions to their local communities.
Key mergers that shaped who JPMorgan Chase is today:
In 1991, Manufacturers Hanover Corp. merged with Chemical Banking Corp., under the name of Chemical Banking Corp., then the second-largest banking institution in the United States. In 1995, First Chicago Corp. merged with NBD Bancorp., forming First Chicago NBD, the largest banking institution based in the Midwest.
In 1996, The Chase Manhattan Corp. merged with Chemical Banking Corp., under the name of The Chase Manhattan Corp., creating what was then the largest bank holding company in the United States. In 1998, Banc One Corp. merged with First Chicago NBD, under the name of Bank One Corp. After a subsequent merger, Bank One became the largest financial services firm in the Midwest, the fourth-largest bank in the U. S. and the world's largest Visa credit card issuer.
In 2000, J.P. Morgan & Co. Incorporated merged with The Chase Manhattan Corp., effectively combining four of the largest and oldest money center banking institutions in New York City (J.P. Morgan, Chase, Chemical and Manufacturers Hanover) into one firm under the name of J.P. Morgan Chase & Co.
In 2004, Bank One Corp. merged with J.P. Morgan Chase & Co. The New York Times said the merger "would realign the competitive landscape for banks" by uniting the investment and commercial banking skills of J.P. Morgan Chase with the consumer banking strengths of Bank One.
In 2008, JPMorgan Chase & Co. acquired The Bear Stearns Companies Inc., strengthening its capabilities across a broad range of businesses, including prime brokerage, cash clearing and energy trading globally.
Also in 2008, JPMorgan Chase & Co. acquired the deposits, assets and certain liabilities of Washington Mutual's banking operations. This acquisition expanded Chase's consumer branch network into California, Florida and Washington State and created the nation's second-largest branch network — with locations reaching 42% of the U.S. population.
In 2010, J.P. Morgan acquired full ownership of its U.K. joint venture, J.P. Morgan Cazenove, one of Britain's premier investment banks.”