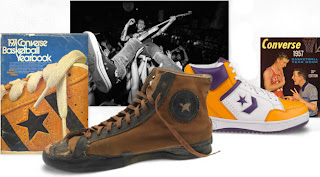 “Everyone has a history — an account of the things they’ve done during the time they’ve been around. We think of ours as a bunch of cool stories that have led us to where we are and will show us where we’ll go. We’ve also been around long enough to learn it’s not about how old you are, but how good you are — and that everyone loves a good story. Here are a few about us:
The Beginning - Sometime in 1908, Marquis Mills Converse decided to start a rubber shoe company, bypassing a rubber trust that prevented most companies from doing business directly with their retailers. Early catalogs bragged about how many trucks left the Converse factory in Malden, Massachusetts, delivering product directly to stores in Boston. Mr. Converse’s idea worked. But more importantly, it survived.”
(1908-1918) In 1913, Converse produced a catalog with the following words: “Our company was organized in 1908 fully believing that there was an earnest demand from the retail shoe dealer for a rubber shoe company that would be independent enough not to follow every other company in every thing they do.” Those words would prove prophetic. Always a brand for those independent enough not to follow, the young company would take up with a young sport: Basketball. Also, Converse made tires. But the basketball shoes gained more traction.
(1918-1928) Chuck Taylor joins the Converse Rubber Company. How it happened remains lost to history, but the reason isn't: Chuck Taylor loved basketball and desired nothing so much as to spread of the word of the new game and sell the sneakers it required. By this point, the All Star shoe has been introduced and features the distinctive diamond pattern sole.
(1928-1938) By the time he lent his name to his signature badminton shoe in 1935, Jack Purcell had won five consecutive Canadian championships and been declared the world badminton champion. The Jack Purcell sneaker retains the legacy of its namesake and the feel of his sport.
(1938-1948) World War II provided Converse with a singular opportunity. Many products destined for servicemen overseas now became a focus of Converse manufacturing. The product range included footwear, apparel, boots for pilots and army servicemen, parkas, and rubber protective suits and ponchos.
(1948-1958) The invention of Rock & Roll. It was loud, lewd, filthy and everything everyone who feared it said it was. It was also a movement in search of a uniform: It found the leather jacket, the blue jean and the high-top sneaker. Interestingly enough, right about this time, the high-top sneaker was around for the birth of something else: The National Basketball Association.
(1958-1968) A decade of change — for everybody. Rock & Roll and pro basketball grew up (in Chucks), and All Stars finally came in colors. In tumultuous times, legends are born — and from a green and white basketball team to a British invasion, from rooftops to alfalfa fields, Converse was along for the ride.
(1968-1978) Somewhere right around 1974, the All Star sneaker got a little bit of a makeover. Remade in colorful suede with a big, bold star on the side, it was built for basketball—but there was something about its brashness and brightness that would make it irresistible to a generation of rockers, skaters and rebellious souls. Then around ’76 came the Pro Leather, an instant favorite in a time when the game needed a vibe.
(1978-1988) An immediate on-court favorite, the Weapon sneaker became almost universally favored by professional, college and high school teams throughout the 1980s and ’90s. In 1986, Converse launched the “Choose Your Weapon” ad campaign, featuring two of the game’s biggest rivals wearing one of the game’s biggest shoes. Over 20 years later, the legacy of Weapon — and its place in sport and culture — continues to challenge the competition.
(1988-1998) First came Grandmama. That was a big deal. Then, in 1996, Converse had a hit on its hands with a basketball shoe called the All Star 2000. It was the first attempt at replicating the Chuck Taylor All Star sneaker for contemporary competition, and there was something about its ankle patch, red midsole stripe and no-nonsense approach to the game that at least 1 million people couldn’t resist.
(1998-2008) The brand enters its second century by honoring its heritage of seeing things a little differently, loving people who want to change the world for the better, and basically celebrating the spirit of rebellion and originality in basketball, Rock & Roll and anywhere else you find it. And there you have it — for now… The best stories are the ones that don’t end — the ones you just keep adding to and adding to — all the while marveling at the creative, disruptive, optimistic, courageous ways things evolve from being what they were, to what they are, to what they will become.