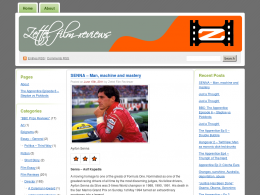 Zettelfilmreviews is just 3 years old. It now offers nearly 250 film reviews including 17 BBC Prize reviews from their now defunct Arts website. Having these reviews selected for prominent publication and awarded prizes was very encouraging recognition of their worth. The site also holds 60 poems, over 50 Television reviews and other occasional posts of general interest.. Over 200,000 people have read these reviews on this and an associated writers’ site on which many have also been posted.
‘Zettel’ is German for a small scrap of paper. After the death of the Philosopher Ludwig Wittgenstein a box full of scraps of paper on which thoughts and ideas he had assembled over many years was found. These extraodinarily varied and profound thoughts were published posthumously under the title Zettel. As an ex-philosophy teacher this seemed an apt name and is certainly a name to live up to. I run the site myself and at this stage see all films and write all reviews myself at my own expense.
The Zettel site is totally independent and has no industry links or commitments. It is driven by my desire to constantly improve my writing and a life-long love of movies of all kinds. I believe the film and cinema were the paradigm 20th century popular art form having a profound effect upon Western culture and our sense of social and personal identity.
It seems absurd and anomalous that a collaborative art form where one film may take several years and often multi-millions of $/£ to make is fed into a commercial machine that frequently commoditises it, sucks it dry of every $ of profit and then discards it with little interest in its aesthetic merit or artistic aspiration. Most Zettel reviews are dedicated to the belief that films are as worthy of serious critical analysis as any novel, play, painting, sculpture or piece of music etc. Yet most movie/film reviews are seen as transient writing about ephemeral entertainment.
Zettel reviews are for these reasons selective and usually longer than the general run of synoptic or even analytical reviews. Review criteria are varied. I may review a film that:
Poses serious philosophical or moral issues.
Stimulates ideas and debate worth exploring, airing and responding to.
Is specially good or particularly bad – aesthetically or ethically
Foreign language, sub-titled films that get restricted critical attention and/or limited release
Is meretricious, hypocritical or dishonest.
Is over- or under-praised.
I love sub-titled films: they enable one to simultaneously understand the meanings of the language and the action while enjoying the rhythm, cadence and sheer musicality of the different languages in which they are shot. It is my view that actors are with a few remarkable exceptions most effective in their own first language: this affects not only the dialogue but also the physicality and kinetic quality of the acting performance.
I’ve loved movies all my life: fun movies, action movies, entertainment movies, challenging films, innovative films, and serious films; mainstream Hollywood and foreign ‘art house’ films.  I love good trash movies. I admire many films I don’t like – some of Scorcese’s movies for instance. I go to the cinema to be entertained, to laugh, to cry, to be challenged to think, to be moved, to feel the vicarious pleasure of fear and danger and suspense..
I hate to be preached at in movies, to have my intelligence insulted by weak plots, lazy writing, and exploitative movies driven by market analysis instead of artistic vision.
I started writing reviews to develop my writing skill. Now I do it for its own sake. My interest in serious reviewing was aroused by the late Pauline Kael of the New Yorker. She had wit and style, and her incisive, perceptive writing, together with her sometimes for me, ‘wrongheaded’ analyses, made her a totally distinct and distinctive voice on movies.
Over 200,000 people have read Zettel reviews on the internet so far through a writing outlet and a number of these reviews have won prizes. This site is to draw them all together, together with my other writing, especially poems, and make them freely available to anyone with a mind to read them. My objective is in a sense to share my love of movies through the reviewing process and I look forward to responding to anyone whether they share my analysis or deeply disagree with it.
Synoptic reviews are helpful – but I don’t write them. They are widely available almost everywhere. They offer no writing challenge or space to permit a distinctive voice to emerge. I do not try to cover all films released; I take those that seem worth the effort either to praise or even slate. I hope to make the fun I have writing the reviews come through to the reader of them. I am as delighted at trying to make you laugh as I am at trying to provoke your thought.
I studied and taught Philosophy at King’s College in London for 7 years in the 70s. A department heavily influenced by the philosophy of Ludwig Wittgenstein. His approach to philosophy and especially language constantly echoes through these reviews. I have also been a P.E. and Adult Education Teacher, senior manager in the Oil Industry and bookseller.”