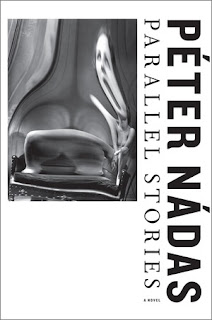 “In 1989, the memorable year when the Wall came down, a university student in Berlin on his early morning run finds a corpse lying on a park bench and alerts the authorities. This classic police-procedural scene opens an extraordinary novel, a masterwork that traces the fate of myriad Europeans - Hungarians, Jews, Germans, Gypsies - across the treacherous years of the mid-twentieth century. The social and political circumstances of their lives may vary richly, their sexual and spiritual longings may seem to each of them entirely unique, yet Peter Nádas's magnificent tapestry unveils uncanny, reverberating parallels that link them across time and space.Three unusual men are at the heart of Parallel Stories: Hans von Wolkenstein, whose German mother is linked to dark secrets of fascist-Nazi collaboration during the 1940s, Ágost Lippay-Lehr, whose influential father has served Hungary's different political régimes for decades, and Andras Rott, who has his own dark record of dark activities abroad. They are friends in Budapest when we eventually meet them in the spring of 1961, a pivotal time in the postwar epoch and in their clandestine careers. But the richly detailed, dramatic memories and actions of these men, like those of their friends, lovers and family members, range from Berlin and Moscow to Switzerland and Holland, from the Mediterranean to the North Sea, and of course, across Hungary. The ever-daring, ever-original episodes of Parallel Lives explore the most intimate, most difficult human experiences in a prose glowing with uncommon clarity and also with mysterious uncertainty - as is characteristic of Nadas's subtle, spirited art.The web of extended dramas in Parallel Stories reaches not just forward to the transformative year of 1989 but back to the spring of 1939, with Europe trembling on the edge of war; to the bestial times of 1944-45, when Budapest was besieged, the final solution devastated Hungary's Jews, and the war came to an end; and to the cataclysmic Hungarian Revolution of October 1956. But there is much more to Parallel Stories than that: it is a daring, demanding, and very moving exploration of humanity at its most constrained and its most free.”