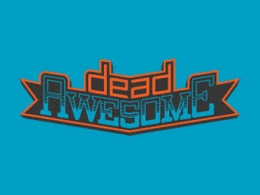 “Two girls with a blog, a love of movies, TV, and all things entertainment, with no shortage of opinions or things to say. We talk a lot when we want to, and twice as much when we love something, but if we’re not a fan, trust me, you’ll know. We keep it fun here. This isn’t the place to come if you’re looking to be spammed with press releases and paparazzi photos. We’re not limiting ourselves, but we know what we’re not and we know what we are. We’re deadAWESOME.

A native Southern Californian, Anna is currently working on her bachelor’s degree in Communications at California State University, San Bernardino. She has written and produced content for her school newspaper, which included interviewing 2008 and 2009 American Idol contestants. In 2010, she spent an eye-opening semester abroad in London, furthering her know-how in international communications. She is also crazy about Disney, Doctor Who, Great Britain, and practically everything that falls under that umbrella. When she’s not at deadAWESOME, she can be found whiling the hours away on Tumblr.
Favorite TV Show: Doctor Who
Favorite Movie: Almost Famous
Favorite Album: Darkside by Tim Minchin
Favorite Book: Gareth Stein’s The Art of Racing in the Rain.

LAUREN PON • lauren@deadawesome.net
Lauren is an office jockey by day, movie and TV enthusiast by night who also likes to pretend that she moonlights as a writer. With her bachelor’s degree in English from the University of California, Irvine, she’s written for award-winning productivity blog Lifehacker, as well as online entertainment blog Eclipse Magazine. She has interviewed television show stars from NBC and ABC Family primetime. She loves most movies that are thrown her way, but if she had to take her pick, science fiction and fantasy are definitely her genres of choice. When she’s not furiously mashing away at the keyboard, she can be found surfing Reddit or playing Mass Effect, Minecraft, and point-and-click adventure games. In other words, she’s the resident nerd.
Favorite TV Show: Game of Thrones
Favorite Movie: Ocean’s Eleven
Favorite Album: Continuum by John Mayer
Favorite Book: Garth Nix’s Sabriel”