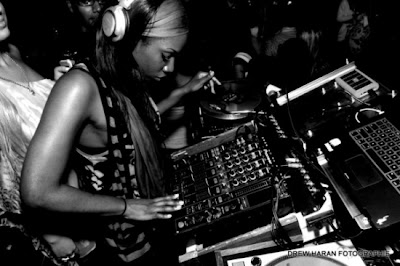 “Having spun records for the likes of U2, LeBron James, Drake, Rachel Roy and brands such as Sony Style, Victoria's Secret, and the LVMH group - Moët & Chandon, Hennessy, etc, DJ Lissa Monét has captivated taste makers, party goers and music lovers with ego-free talent that delivers the right music and vibe to events that she has spun at with modesty and intelligence.
Originally from Toronto, Lissa has been influenced by such legends as Mary J. Blige, Jay-Z, Aaliyah, Stevie Wonder, Al Green, Michael Jackson, Phil Collins, Hall & Oates mixed with music from her Caribbean upbringing and a passion for reading album liner notes. In her mid-teens, Lissa jumped feet first into the business of the music industry providing information to other industry colleagues in hopes of cultivating new business partnerships and opportunities and never looked back. Utilizing social networks such as MySpace and Facebook, Lissa discovered new artists and created outlets such as mini mix tapes and her personal blog to connect people to new music or artists such as Ryan Leslie and Drake. For this, Lissa was simply dubbed ‘the go to girl’ for all things new, innovative and exclusive. Lissa Monét then used her business and marketing background as leverage to learn what it takes to be successful. “Whenever I’d see a void, I’d use my resources and connect people to make things happen.”
That void was a lack of female DJs in the Toronto party scene. And fueled with her passion for music and with encouragement from fellow DJ friends, Lissa bought two turntables and a mixer and started studying the art of mixing music. Shortly thereafter, with her popularity spreading through word of mouth, Lissa started spinning popular club nights across Toronto. She became a fixture for the highly anticipated Wayne Warner events hosted by Hennessey and Moët & Chandon and was soon spinning in clubs in Detroit, New York and Atlanta. Inventive and energetic, Lissa was pleasing crowds while controlling the vibe of the party mixing musical genres such as r&b, hip hop, soul, house/dance, rock, reggae and her favorite, 80s classics.

DJ Lissa Monét was recently awarded the 2009 Stylus Female DJ Award which recognizes the achievements of DJs across Canada.
Recently, DJ LissaMonét has spun at hot spots in Toronto (Rockwood, Nyood, Tryst, Lobby, Century Room, Courthouse). Dream Nightclub in Cleveland, Bungalow 8 & Gypsy Tea in New York City, Aura, Viper Room & Bamboo in Nassau, Bahamas, the opening of Club Rouge in Uganda, Africa.
A one of a kind talent, Lissa excels in any field she chooses whether its blogging, artist development, marketing/ branding or DJing. Her branded mixtapes such as Love Letters and Broken Hearts and the Keri Hilson Miss Perfecton mixtape are still very popular and can be found on her blog for download. Lissa's mandate as a DJ is simple: “Good music is good music, no matter what your genre preference.”