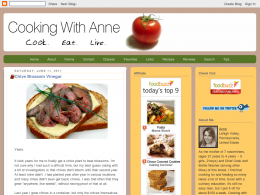 “I am Anne, a 43 year-old single mother to 7 children. My kids range in age from 4 years to 22 years and keep me busy pretty much full-time. When I'm not taking care of them, I cook and write. My culinary career started way back when I was about 8 or 9 and decided, along with my younger brother, that I wanted to make pizza. It was a horrid concoction of flour and water dough topped with sliced tomatoes and American cheese. Truly icky and not fit for human consumption. Thankfully, I learned as I grew - mostly by watching my mom and grandma as they cooked for my 4 brothers and I and a host of "church folk".
After the birth of my second daughter, I thought I might go back to school. I really wanted to go to culinary school (CIA), but couldn't afford it in money or time, so I decided I would go to the local community college for Criminal Justice. Don't ask why, long story.
As fate would have it, it was the very first year that culinary arts was being offered at the college, and, what comes right after "cr" - for Criminal Justice -in an alphabetical listing? That would be "cu" - for Culinary Arts. I was so excited I could barely contain myself. I signed up, waited to hear if I made the cut (they had a huge turn-out that year and have a waiting list now) and went off to buy a pair of shiny black oxfords and a chef's jacket.
I LOVED school. I graduated in the top of my class and envisioned a life of glorious slaving away between a salamander broiler and heat lamps, gleefully burning my hands and arms in the eternal search for the perfectly plated meal.
Well, life happens - as it always does - and we had many, many setbacks. I owned a small cafe for about 2 minutes and then got on with life, having more babies and cooking for whoever would eat what I made. I read cookbooks like crazy, read and re-read my school texts (The New Professional Chef, for one), talked food with all my friends in AOL Food Chat, watched every cooking show I could find, and catered events for friends and family.
In July, 2005 I started a blog, Cooking with Anne, that began as a chronicle of our food life at home. I have tons of family recipes, but very little history to go with them, and I wanted my kids to have a little more than I had, so I wrote it all down. In January of 2006, my little old "food journal" won a Best of Blogs award for Best Food Blog. To say I was excited is an understatement.
I blogged, not only about food, but about family and trials - my grandmother's stroke and passing in 2005 - my father's cancer and eventual death in 2006. I didn't want to be all about food when life was happening no matter what we were eating.
I kept on keeping on and writing and in November of 2006 I was contacted by the Walt Disney Internet Group and asked for writing samples. I wasn't sure what to send, so I picked a couple posts that I was pleased with and passed them on. I held my breath as the decision day came and went. I was sure I hadn't made it, but was OK with that. After all if Disney asks for writing samples, even if you don't get in, it's an honor.
The very next day I got a call that they wanted me to blog for them at Family.com. I was thrilled beyond belief and didn't actually believe them until the day the site went live. I blogged for WDIG at Family.com as Short Order Mom at my blog there, Cookies to Caviar. After a few adjustments and name changes, I've settled into recipe development for them, providing recipes, photos and short headers.I did that for four years and loved every minute of it. I also wrote for BlogCatalog at their site HalfHourMeals.com. Now I write for myself and for ShopRite at their blog, Potluck.
Culinary-student-mom-turned-writer-recipe-developer-photographer is not where I envisioned I would be at any point in my life, but it's been fun regardless. I hope to someday travel to Provence, meet up with Peter Mayle for lunch, and then open a small cafe after all the kids are off in school. It may be far-fetched for me, but I'm not much of a quitter ... we'll see.