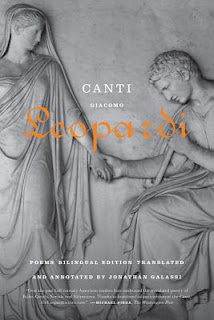 “Giacomo Leopardi is Italy’s greatest modern poet, the first European writer to portray and examine the self in a way that feels familiar to us today. A great classical scholar and patriot, he explored metaphysical loneliness in entirely original ways. Though he died young, his influence was enormous, and it is no exaggeration to say that all modern poetry, not only in Italian, derives in some way from his work. Leopardi’s poetry is notoriously difficult to translate, and he has been less well known to English-language readers than his central significance for his own culture might suggest. Now Jonathan Galassi, whose translations of Eugenio Montale have been widely acclaimed, has produced a strong, fresh, direct version of this great poet that offers English-language readers a new approach to Leopardi. Galassi has contributed an informative introduction and notes that provide a sense of Leopardi’s sources and ideas. This is an essential book for anyone who wants to understand the roots of modern lyric poetry…”
a novembre 28, 2011 Nessun commento: